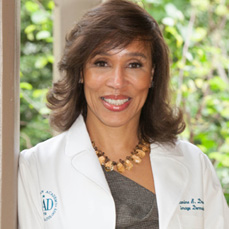 Dr. Jeanine B. Downie of image Dermatology ® P.C. is licensed to practice not only in New Jersey but also in California and New York. Board certified by the American Board of Dermatology, she is also a fellow of the American Academy of Dermatology. Her reputation for excellence and personal patient care have made her one of the most sought-after physicians in our area.

Dr. Downie graduated from Tufts University with a Bachelor of Science in Psychology and Biology. She then completed a Master of Arts program at American University. She received her medical degree in 1992, after completing a rigorous course of study at that State University of New York, Health Science Center at Brooklyn. Her extensive background in dermatology includes a residency in Pediatrics at Cornell Medical Center, New York Hospital and a residency in Dermatology at Mount Sinai Medical Center, where she also served as the Chief Dermatology Resident. In addition to her private practice, Dr. Downie is a staff member at Overlook and Mountainside Hospitals.

Dr. Downie is a sought after lecturer and author of several dozen scientific papers. She has spoken on behalf of some of the most renowned medical societies, including the American Academy of Dermatology, The Skin Cancer Foundation, the American Society for Dermatologic Surgery, and the Women’s Dermatologic Society. Topics on which she speaks with expertise include photoaging, skin cancer, cosmeceuticals and injectibles, cosmetic dermatology, skin of color, and sun protection. She has also participated in numerous clinical trials for some of the top pharmaceutical companies. With a passion for education, Dr. Downie proudly services as an educator for the American Society of Dermatologic Surgery. She has also provided focused training on injectibles and fillers and has been a longstanding faculty member on Allergan’s National Exchange Forum in which techniques are discussed.

Happy to share her knowledge with others, Dr. Downie has been interviewed and featured in numerous media outlets. She has also consistently received the honor of recognition as one of Castle Connolly’s Top Doctors in the New York Metropolitan area. On television, Dr. Downie has appeared on The View, The Early Show, Good Morning America, The Today Show, Dr. Oz, GMA Health, The Wendy Williams Show, The Rachel Ray Show, Good Day New York, Fox 5 LIVE News, Channel 2 Morning News, BET News, Channel 9 News, News 12, Fox 5 Sports, Living It Up with Ali and Jack, Ten Years Younger, The Montel Williams Show, and more. Her melanoma segment on Fox 5 Sports and MSG Network was nominated for an Emmy.

Radio shows on which Dr. Downie has been featured include The Wendy Williams Show, Dr. Radio on SiriusXM, The Conversation with David Cruz on NPR’s WNYC, The Gary Burbank show in Cincinnati, Martha Steward Afternoon Living, The Frankie Boyer Show in New York and Boston, The Dolan Sisters (“Satellite Sisters”) on SiriusXM, KAHJ-AM in California, WLIB and KISS-FM in New York, CNN radio, KCMN-AM in Colorado, and more.

Dr. Downie and her husband have one daughter. In her down time, Dr. Downie enjoys reading, swimming, and skiing. She feels very strongly about educating her patients in the area of skin cancer prevention, and loves sharing her knowledge with others.

Before and After Images

There are dermatologists and then there are celebrity dermatologists... Dr. Downie is a legend whose passion inspires many. Congratulations to the Star of the Month (February 2017) winner!!
Dr. Jeanine B. Downie of image Dermatology ® P.C. has also won the 2016 Montclair Doctors' Choice Awards in Dermatology.

Posted by Doctors' Choice Awards on Thursday, May 4, 2017 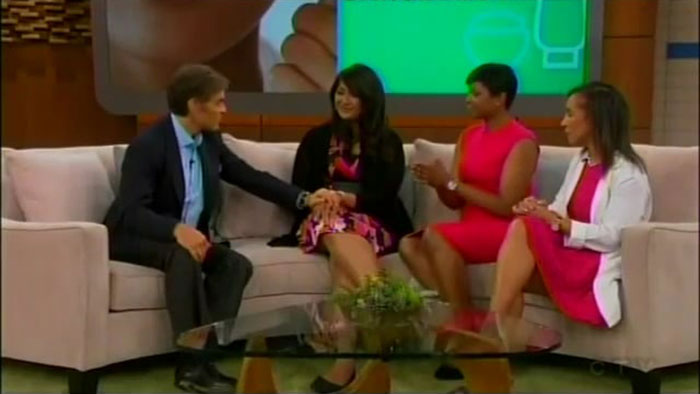 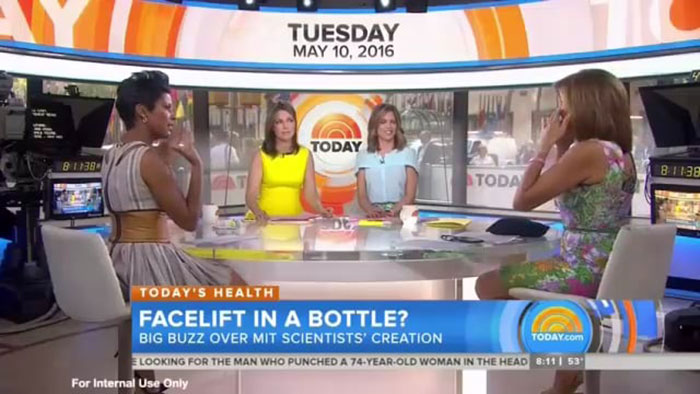 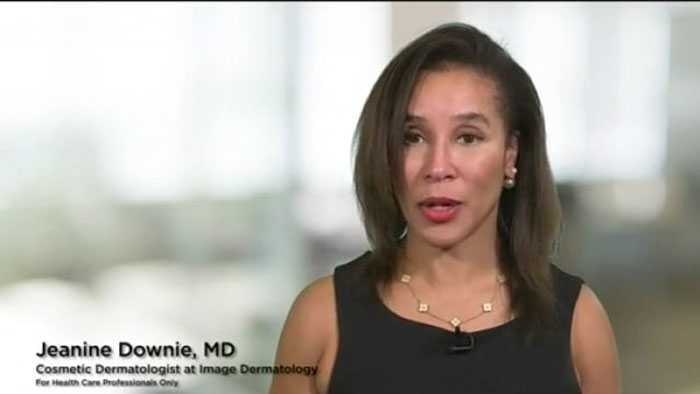 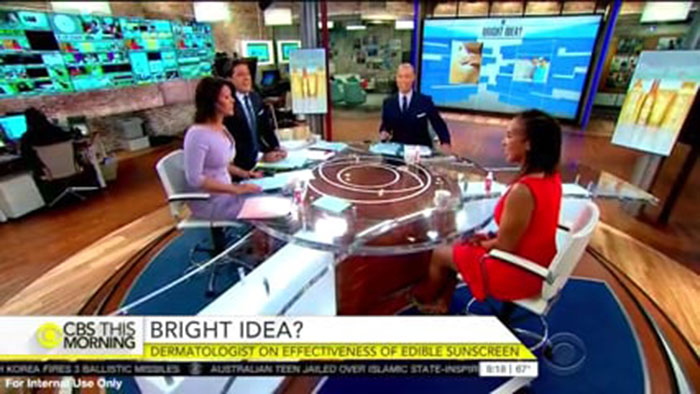 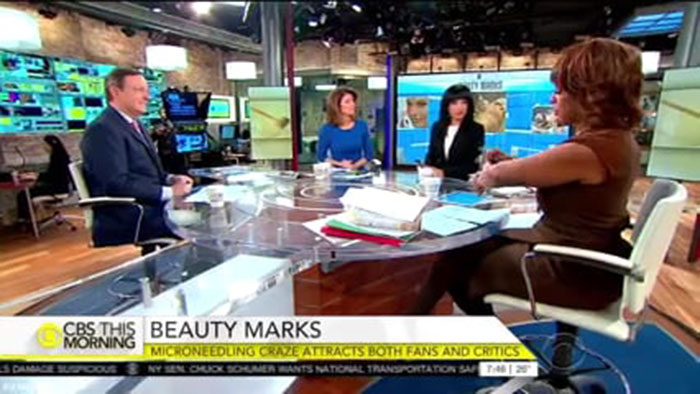 Gayle: It’s a good song for this story, a popular new treatment is helping a growing number of people to search for the fountain of youth. Microneedling is what it’s called—it uses tiny needles to improve your skin. The procedure was only available at dermatologists’ offices or even high end spas but now companies are selling devices so that you can do this at home despite concerns from the FDA. Michelle Miller looks at whether this is a true break through or as critics say, this is just a marketing ploy. Michelle, can’t wait to hear, good morning.

Michelle: Good morning, it’s not just beauty bloggers who are hyping these at-home micronee-dling tools, major publications from The New York Times to Allure magazine are devoting copy to these devices, but doctors say consumers should be aware of a few risks.

Woman on TV: The biggest beauty craze right now which is microneedling

Michelle: It’s the latest in “do-it-yourself” beauty. Microneedling is coming home from the of-fice, and demand for these products is outpacing the supply.

Woman on TV: You sold out, not once, not twice, but six times on beauty report.

Jamie O’Banion: I know it.

Michelle: Jamie O’Banion’s GloPRO, sold here on HSN, is just one of a number of microneedling tools marketed for at home use. The GloPRO and devices like it use tiny needles to pierce the skin, stimulating the body’s natural regeneration response.

Jamie O’Banion: What does the skin do? It says “I’ve been injured, I need to heal, I need to cre-ate new collagen, new skin cells.”

Michelle: Prices for this popular product range from the $30 no frills Stack skincare device to the $200 vibrating GloPRO. Compare that to in-office treatments which can start at $500.

Michelle Lee: A lot of these very expensive procedures that people have done in-office, the fact that people can now bring them home is very appealing. So I’ll usually go kind of all the verti-cal’s first.

Michelle lee: Doing the at-home version feels almost like a cat licking you. When you have a pro-fessional do it, it hurts.

Michelle: But not everyone is sold. Dermatologist Jeanine Downie offers in-office microneedling treatments to reduce scarring, signs of aging and even stretch marks, but she cautions against the use of at-home tools.

Dr. Downie: It can spread infection, that it can actually cause scarring, and that it can make whatever you’re trying to treat worse.

Michelle: The FDA has also issued warning letters to several microneedling pen manufacturers, not including GloPRO.

Woman on TV: The FDA has safety concerns regarding the potential for the needles to damage vessels and nerves. What do you think about that warning?

Jamie: Yeah, and I think that’s very interesting, I’m very familiar with all the cases that you’re referencing and those are from copycat tools as well, and again it goes back to safety, you know, trust your skin to the original.

Michelle: In addition to her concerns about at-home devices, Dr. Downie has one more piece of advice.

Dr. Downie: So if you’re microneedling and you’re not using sunblock, you’re really wasting your time.

Michelle: Well, Dr. Downie and other dermatologists say protecting your skin from the sun is the best way to combat skin damage. Now when it comes to choosing between these devices, Al-lure’s Michelle Lee says your skincare is no place to scrimp but that doesn’t necessarily mean that the most expensive tool is the best for you and your skin, so make sure you do your research. And we have a few of them here, ranging in price from $30 all the way up to $200, so you have a range.

Gayle: Well all morning long, we’ve been saying tiny little needles, the fact that I can do this and squeeze it, this is, that doesn’t even feel like a needle.

Michelle: Well, it’s supposed to, you know, penetrate at, you know, the cell level, so or, you know, it.. we’ll see. We’ll see what happens, I mean people swear by it.

Gayle: It’s not as bad as I thought it was gonna be. I might be borrowing this one.

Man on TV: Gayle was imagining needles in her face.

Gayle: I was, after I’ve been pooh-pooh-ing it all morning, that’s why you should wait to hear the whole story! Thank you, Michelle, thank you. 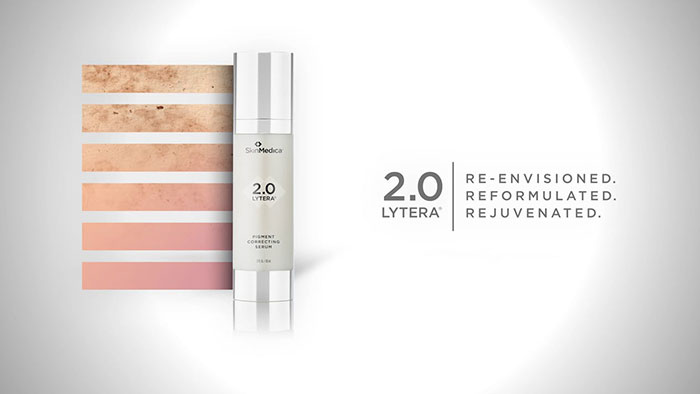 It’s time to get even with skin discoloration. Lytera 2.0 is a re-envisioned, reformulated, and rejuvenated product. Patients suffering from hyperpigmentation often describe their skin as having blotches, scars, and age spots, appearing dirty and uneven.

“I just noticed in here the dark marks were getting larger. I tried so many different things, but nothing seemed to work.”

“I had noticed it under my eye and towards the back of my cheeks. I had not idea what this is. It’s dark, it’s ugly, people are looking at me and they’re telling me, ‘Oh, your skin looks weird.’”

“There are multiple known pathways of hyperpigmentation, so it’s very important to understand the biology of pigmentation very thoroughly. Lytera 2.0 we started working about three years ago, and that’s because newer pathways were being discovered by skin biology and it’s important to then find ingredients that can affect all those different pathways. Combine them into one, to provide a 360 approach to pigmentation control.”

“Because of differences in melanin biology, ethnic skin can be some of the most challenging skin to treat. The Lytera 2.0 actually addresses very stubborn hyperpigmentation, and then in addition it works beautifully on all skin tones. And it’s retinol-free and it’s hydroquinone-free. That’s very important to a lot of my patients. We can even out the skin tone while we’re not drying or irritating the skin at all. And then I will do chemical peels here in the office. I love the Vitalize and Rejuvenize peels and I do a lot of them. So it’s kind of like steps in levels to get my patients to where they want to go. I have a couple of my patients using Lytera 2.0 right now in a small clinical trial that I’m doing. They like the product. It’s non-irritating. They feel like their skin is a bit more even and we can already start seeing results that I feel will be more progressive as we go along. So I’m excited and they’re excited.”

“I’m very, very happy with the product. It evened out my skin tone and it didn’t irritate my skin. It brightened my skin when I put it on, and I saw a difference in such a short period of time that I was amazed.”

Restore your skin to its most beautiful shade of even. Lytera 2.0 is re-envisioned, reformulated, and rejuvenated. This is your moment to get even.